skip to main | skip to sidebar

Want to be able to post your own donations, charities, warm fuzzy thoughts? Email us at homespunhelpers@gmail.com

Add yourself to our Frappr Map!


In January, jpettibone and I talked about starting about our millionth group. The goal would be to make 3,000 items for charity in 2007 to honor the 3,000 US soldiers who at that time were counted as killed in Iraq. We did the math. 3,000 divided by 12 was, well, an awful lot of items. But we started the group anyway. We promoted the community to other livejournal communities and to the livejournal promo community and even bothered and begged our friends.

Slowly but surely, we noticed that a few people were following us. Death by yarn, doclegs, lindsoriah...you were some of the first ones I remember who joined us! 3,000 seemed like it was a long way away, but we were having a great time and we were doing some good. What better combination is there?

As the months went on a lot happened that sort of made making the actual goal irrelevant. We met a lot of wonderful people, we started working in all kinds of internet venues, and the stuff our members made was just always glorious and right from the heart. We made the lj spotlight over the Summer, which was fun and amazing and exciting. We started projects like Bags o' Sunshine that the wonderful doclegs so beautifully ran for us. We had the square contest run by funfairiegirl, and the wonderful crazigriffen who sewed all of those squares together for us.

As we got closer to the holidays, I didn't think we'd make 3,000. We had lots of projects going on but school and jobs seem to be in full force this time of year. So inconvenient! But Priscilla, Zort, and many others kept on plugging away. Then, all of a sudden, jezebel, ever the over-achiever, not only continued to run "how many people can we dress," but she also made a metric crap-load of cookies for a fundraiser! And then our dear singingjoy, so aptly named, just posted 144 amazing hand-made cards for A Million Thanks.

I hope that 2007 remains only the first of many many years for this group. I hope that we can grow into a non-profit charitable foundation someday. But I have to tell you, this year will always hold a special, special place in my heart because it was the first year. I first met all of you, and you were the pioneers who stuck around as we plodded on.

Thank you to you all. Let's relax for a month and start thinking about Year 2, the Sequel :D
Posted by Real Life Mad Man at 6:18 PM No comments: 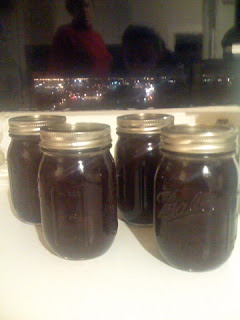 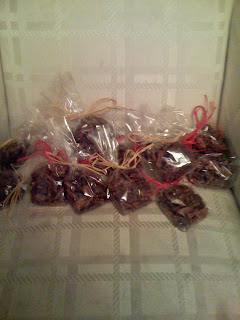 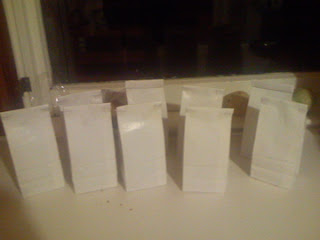 My final tally for the bake sale is:

14 bags of Bourbon spiced pecans
9 bags of cheese coins
4 jars of homemade plum preserves
Posted by Pag at 12:37 AM No comments:

two items to get us closer

I thought this goal was impossible 11 months ago.

Turns out we're a month early. 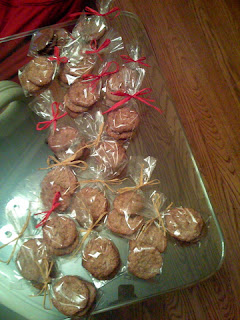 Hi! The first of a few posts regarding the baked goods for the fundraiser I am chairing on Wednesday. The picture shows 18 bags with 3 cookies per bag for a total of 54 cookies. For those of you who are curious, they are Toffee Oatmeal Crisps :)
Posted by Pag at 9:46 PM No comments:

I added 5 more hats that I made over Thanksgiving break to what I donated to the daycare.
Posted by Janice at 7:56 PM 1 comment:

and counting!!!
Posted by Real Life Mad Man at 8:02 PM No comments:

As we head into the Turkey Day weekend, we are, unbelievably enough, only 10 items away from hitting 2,900 items!

Now, I know that eating to the point of pain can cause fatigue, but I am hoping to do a bunch of crafting this weekend. Let's see if we can hit 2,900 so that in December, we'll be counting down to 3,000!!

Happy Thanksgiving to all who celebrate it. We have so much to be thankful for, and hopefully we have given some others less fortunate a feeling of thankfulness as well.
Posted by Real Life Mad Man at 10:15 PM No comments: 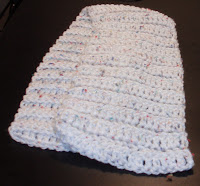 I have 3 more FOs to post. I managed to finish one more scarf for my guild's donation to the Salvation Army.

I have finished my first pair of mittens for the Soaring Eagles project. 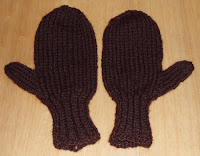 And I have crocheted a hat that will be donated to St. Jude's Children's Hospital.

The reason I am posting these 3 projects now, as opposed to the end of the month, is that with these 3 items, I have completed my goal of making 100 items for charity this year! I am very excited, but the year isn't finished yet and neither am I. So I am having a little contest. I am asking everyone to guess how many more items I can finish for charity this year. I will announce the winner on New Year's Day. Details can be found on my blog.

I would also like to take this opportunity to wish everyone a Happy Thanksgiving and to thank you all again for the inspiration and motivation you have all given me this year. I'm not sure I would have made that goal of 100 items for charity if I hadn't found this group. And I can't wait to see what we come up with for next year!

My living room is stacked with boxes ready to sort :)

Realistically, I will not get to sorting until Sunday and then shipping on Monday, so there are a few cushion days left.

My plan is to ship to Chicago and Boston first. I know that it has been a fairly mild winter so far, but these two cities really do suffer some serious cold! All "extra" items that are not matched as part of an outfit will be held for the next shipment deadline. I will announce that along with a pic-a-palooza post regarding the final tally sometime next week.

I want y'all to know how great it has been receiving these boxes full of warm and woolly items. I will include our new charity "calling card" (i.e. homespun helpers jpeg) with the items that are shipped.

I just wanted to let everyone know that today is the start of Knit Unto Others. This is a low key charity KAL that asks everyone to make one item for charity during the next 2 weeks. And if you let them know what you made, you will be entered into a drawing for prizes.

Posted by Priscilla at 7:56 AM No comments:

Today is my crochet guild meeting, and this is the meeting where we collect hat, mitten & scarf sets for the Salvation Army. So I wanted to share my portion of the donation with you. I have been working on this all year (along with lots of other charity projects), and I have 7 sets and one hat to donate today.

On my blog, I have counted each set as one, but technically there are 8 handmade hats and 7 handmade scarves in the picture. (We cheat on the mittens and buy stretchy gloves to speed up the process.)

I have also finished 2 pairs of mittens that I am going to donate to "how many people can we dress". 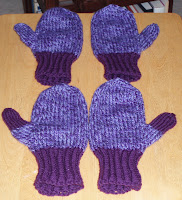 Both pairs were made from Cascade 220 wool, so they will be appropriate for Afghans for Afghans.

Have a wonderful Veteran's Day!

Well hi there everybody. Long time no see. My life is eating me. I guess that's a good thing, but crimeny! I just want to do my crafting, man! :)

Anyway, I write to check in on everyone, and also to pose an idea.

Tomorrow is Veterans Day, and I was thinking it would be neat if we could all try to make at least one thing tomorrow for the "Bag O'Sunshine" Drive. I think doclegs probably could still use some more bags and more stuff to put in them. Of course, this isn't a must, but just a thought.

Hope all are well!
Posted by Real Life Mad Man at 10:06 AM No comments:

Just a friendly reminder that the first shipment of HMPCWD will be heading out in two weeks. Please comment below if you have any questions or need any further details from me.

Other sites of interest

Crafty Contributors Who Aren't on the Interwebs